While overcoming ailments and disabilities is a major accomplishment for any person, the same goes for animals. They, too, often have to learn to live with debilitating injuries they were born with or those they received through abuse. Meet Paddywhack and Mohawk, who are two disabled cats who were found in a cardboard box on the side of the road. Not only were they abandoned and left to ‘make their own way’, but they both had the inability to use their hind legs. Mohawk and Paddywhack were found together. They had been abandoned in a cardboard box. Neither of them had any mobility at all in their hind legs. Their rescuers assumed their paralysis was caused by years of abuse! 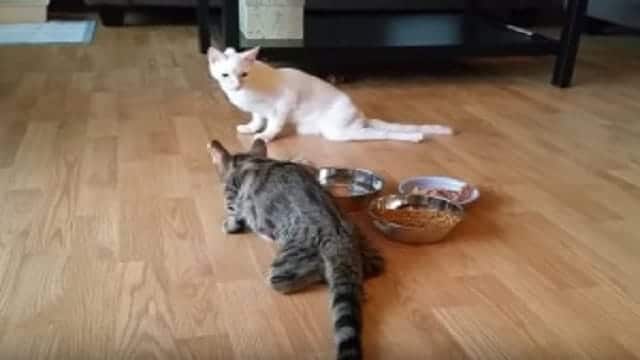 Worried, the rescuers took them over to Toronto Cat Rescue, which is an emergency clinic. After a series of X-rays were performed, the vets learned that the cats hadn’t suffered injuries, but were instead born with paralyzed hind legs. Heather Brown, who is executive director of Toronto Cat Rescue, brought them home and quickly realized that their injuries didn’t prohibit them from getting around and playing! Heather firmly believes that the previous owner may have given up on them because of their disability.

We sincerely hope that Mohawk and Paddywhack find a home soon They truly have been through so much and they deserve to be loved. Photo credits: Toronto Cat Rescue Read these characteristics which almost all cat lovers have in common: INTROVERTED AND SENSITIVE It’s the nature of cats that they are not friends with everybody, and the same trait can be seen in their owners too. Usually, they live alone and are happy with their independent lifestyle. They are introverts but are comfortable hanging around with other people. However, they would need some me-time to relax and recharge. CAT LOVERS LEAN TO LEFT It has been observed that people with liberal political leanings prefer cats over dogs. You might be a liberal dog lover or a conservative cat owner; if you’re a liberal, you love cats and vice versa. CAT OWNERS ARE OPEN-MINDED Five traits – conscientiousness, neuroticism, extraversion, agreeableness, and openness are often seen in most cat lovers. As compared to dog owners, people who have cats as pets are more open and therefore, have greater artistic creativity. ATTENTION SEEKERS Just like their pets, cat lovers seek attention from people around them. They like to be the centre of all conversations. At times, cat owners rely on their pets for emotional support. THEY RESPECT CATS MORE THAN ANYONE Cat people respect cats more than humans, in general. The saddest sight for a cat lover is to see the animal on the streets without a home. Cat lovers are often seen making a special effort to rescue or rehabilitate homeless cats.